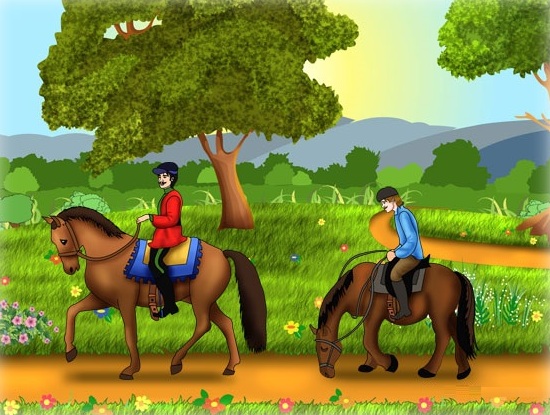 Once upon a time in Russia lay a little village where nearly all the inhabitants bred horses. It was the month of October, when a big livestock market was held yearly in the main town. Two brothers, one rich and the other one poor, set off for market. The rich man rode a stallion, and the poor brother a young mare
قسمت اول

At dusk, they stopped beside an empty hut and tethered their horses outside, before going to sleep themselves on two heaps of straw. Great was their surprise, when, next morning they saw three horses outside, instead of two. Well, to be exact the newcomer was not really a horse. It was a foal, to which the mare had given birth during the night. Soon it had the strength to struggle to its feet, and after a drink of its mother's milk, the foal staggered its first few steps. The stallion greeted it with a cheerful whinny, and when the two brothers set eyes on it for the first time, the foal was standing beside the stallion. "It belongs to me!" exclaimed Dimitri, the rich brother, the minute he saw it. "It's my stallion's foal." Ivan, the poor brother, began to laugh. "Whoever heard of a stallion having a foal? It was born to my mare!" "No, that's not true! It was standing close to the stallion, so it's the stallion's foal. And therefore it's mine
قسمت دوم 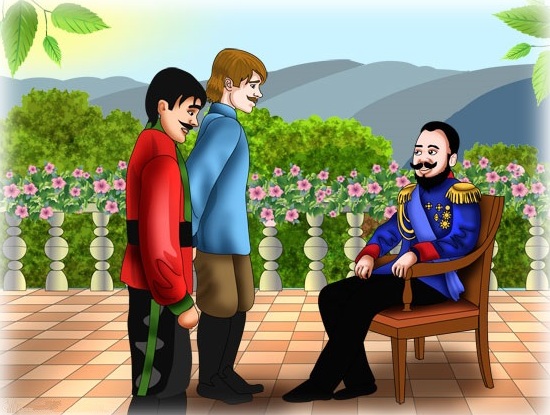 The brothers started to quarrel, then they decided to go to town and bring the matter before the judges. Still arguing, they headed for the big square where the courtroom stood. It was a special day, the day when, once a year, the Emperor himself administered the law. He himself received all who came seeking justice. The brothers were ushered into his presence, and they told him all about the dispute. Of course, the Emperor knew perfectly well who was the owner of the foal. He was on the point of proclaiming in favor of the poor brother, when suddenly Ivan developed an unfortunate twitch in his eye. The Emperor was greatly annoyed by this familiarity by a humble peasant, and decided to punish Ivan for his disrespect. After listening to both sides of the story, he declared it was difficult, indeed impossible, to say exactly who was the foal's rightful owner. And being in the mood for a spot of fun, and since he loved posing riddles and solving them as well, to the amusement of his counselors, he exclaimed. "I can't judge which of you should have the foal, so it will be awarded to whichever of you solves the following four riddles: what is the fastest thing in the world? What is the fattest? What's the softest and what is the most precious? I command you to return to the palace in a week's time with your answers
قسمت سوم 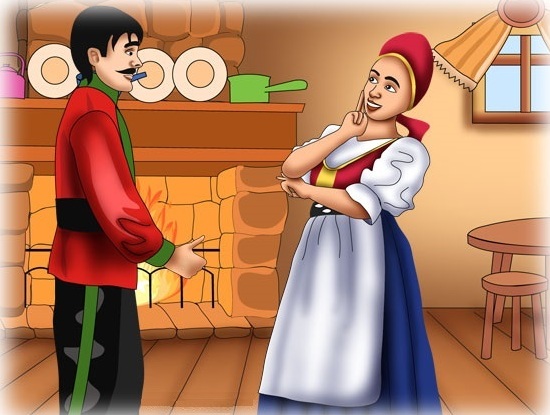 When Dimitri reached home, he realized he had nobody to help him. "Well, I'll just have to seek help, for if I can't solve these riddles, I'll lose the foal!" Then he remembered a woman, one of his neighbours, to whom he had once lent a silver ducat. That had been some time ago, and with the interest, the neighbor now owed him three ducats. And since she had a reputation for being quick-witted, but also very astute, he decided to ask her advice, in exchange for canceling part of her debt. But the woman was not slow to show how astute she really was, and promptly demanded that the whole debt be wiped out in exchange for the answers. "The fastest thing in the world is my husband's bay horse," she said. "Nothing can beat it! The fattest is our pig! Such a huge beast has never been seen! The softest is the quilt I made for the bed, using my own goose's feathers. It's the envy of all my friends. The most precious thing in the world is my three-month old nephew. There isn't a more handsome child. I wouldn't exchange him for all the gold on earth, and that makes him the most precious thing on earth!" Dimitri was rather doubtful about the woman's answers being correct. On the other hand, he had to take some kind of solution back to the Emperor. And he guessed, quite rightly, that if he didn't, he would be punished
قسمت چهارم 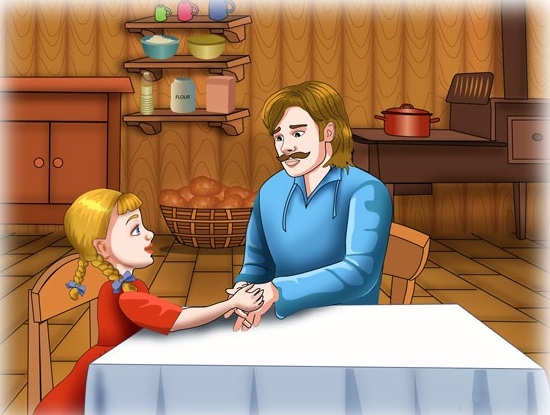 In the meantime, Ivan, who was a widower, had gone back to the humble cottage where he lived with his small daughter. Only seven years old, the little girl was often left alone, and as a result, was thoughtful and very clever for her age. The poor man took the little girl into his confidence, for like his brother, he knew he would never be able to find the answers by himself. The child sat in silence for a moment, then firmly said. "Tell the Emperor that the fastest thing in the world is the cold north wind in winter. The fattest is the soil in our fields whose crops give life to men and animals alike, the softest thing is a child's caress and the most precious is honesty
قسمت پنجم 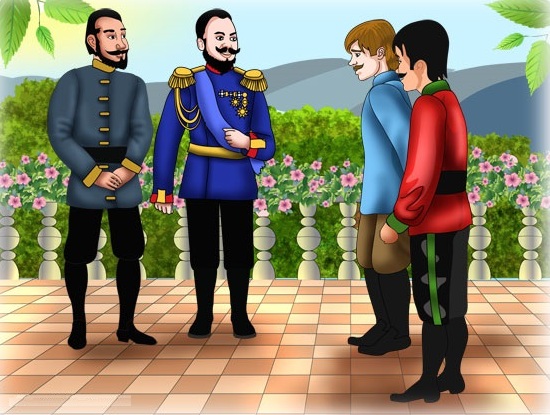 The day came when the two brothers were to return before the Emperor. They were led into his presence. The Emperor was curious to hear what they had to say, but he roared with laughter at Dimitri's foolish answers. However, when it was Ivan's turn to speak, a frown spread over the Emperor's face. The poor brother's wise replies made him squirm. He angrily demanded: "Who gave you these answers?" Ivan told the Emperor that it was his small daughter. Still annoyed, the great man said. "You shall be rewarded for having such a wise and clever daughter. You shall be awarded the foal that your brother claimed, together with a hundred silver ducats... But... but..." and the Emperor winked at his counselors. "You will come before me in seven days' time, bringing your daughter. And since she's so clever, she must appear before me neither naked nor dressed, neither on foot nor on horseback, neither bearing gifts nor empty-handed. And if she does this, you will have your reward. If not, you'll have your head chopped off for your impudence
قسمت ششم 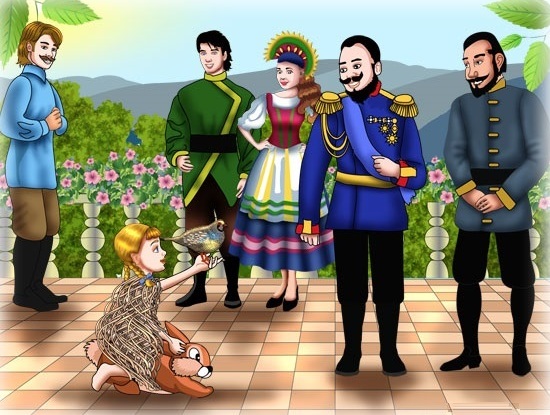 The onlookers began to laugh, knowing that the poor man would never to able to fulfill the Emperor's conditions. Ivan went home in despair, his eyes brimming with tears. But when he had told his daughter what had happened, she calmly said. "Tomorrow, go and catch a hare and a partridge. Both must be alive! You'll have the foal and the hundred silver ducats! Leave it to me!" Ivan did as his daughter said. He had no idea what the two creatures were for, but he trusted in his daughter's wisdom. On the day of the audience with the Emperor, the palace was thronged with bystanders, waiting for Ivan and his small daughter to arrive. At last, the little girl appeared, draped in a fishing net, riding the hare and holding the partridge in her hand. She was neither naked nor dressed, on foot or on horseback. Scowling, the Emperor told her. "I said neither bearing gifts nor empty-handed!" At these words, the little girl held out the partridge. The Emperor stretched out his hand to grasp it, but the bird fluttered into the air. The third condition had been fulfilled. In spite of himself, the Emperor could not help admiring the little girl who had so cleverly passed such a test, and in a gentler voice, he said
قسمت هفتم 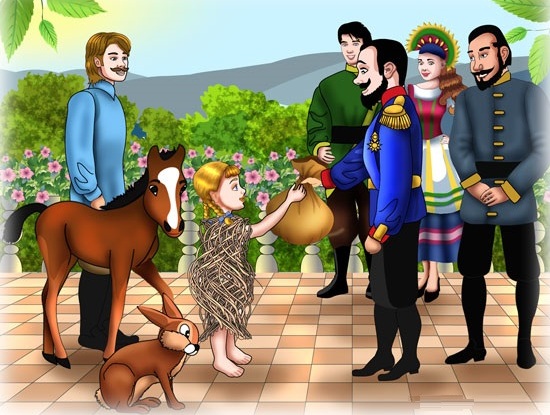 "Is your father terribly poor, and does he desperately need the foal." "Oh, yes!" replied the little girl. "We live on the hares he catches in the rivers and the fish he picks from the trees!" "Aha!" cried the Emperor triumphantly. "So you're not as clever as you seem to be! Whoever heard of hares in the river and fish in the trees! To which the little girl swiftly replied. "And whoever heard of a stallion having a foal?" At that, both Emperor and Court burst into peals of laughter. Ivan was immediately given his hundred silver ducats and the foal, and the Emperor proclaimed. "Only in my kingdom could such a wise little girl be born
قسمت هشتم